How different is a world where a ‘বনেদী’* (Bonedi) Durga Puja which started in 1583, is now held at nearly 400 year old house? A history that dates back to the era of Mughals, a family whose lineage goes back to the times of Ballal Sen and yet amidst the reverence and traditionalism, you find people across all ages, tangled in the long leaves of family tree, come together to celebrate the Puja?

Guptipara, in Hooghly district, is mostly known as the place where বারোয়ারি Durga Puja started and it is still performed with equal enthusiasm. Another major attraction is the ‘Sen bari’ where this Durga Puja takes place.

The entrance to this house brings you to the wide ‘ঠাকুরদালান’* (Thakur-dalan) which has been maintained quite effectively. The long corridors that runs around the ‘ঠাকুরদালান’, the ‘কড়িকাঠ’* (Kori-kath) reminds you of the times lost in the pages of history.

The ‘ঠাকুরদালান’ in itself has three main entrances which leads to the wide hall where Durga idol is built and thereafter, puja is performed.  Here is the Saptami puja happening in ‘ঠাকুরদালান্’.

NOTE: All images used in this blog are sole property of Rahul Roy (https://www.flickr.com/people/royzlife/) and these cannot be copied, reproduced and/or altered without the owner’s knowledge and consent. 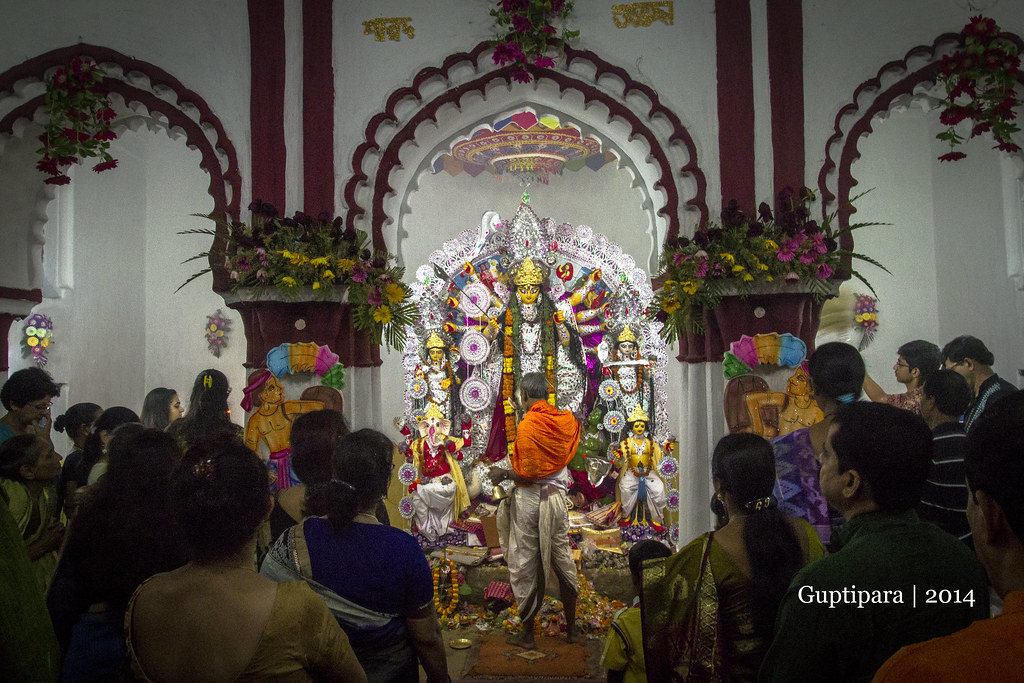 The family priest in action – performing aarti. It’s widely accepted that performing this puja is something all the local priests wish for. 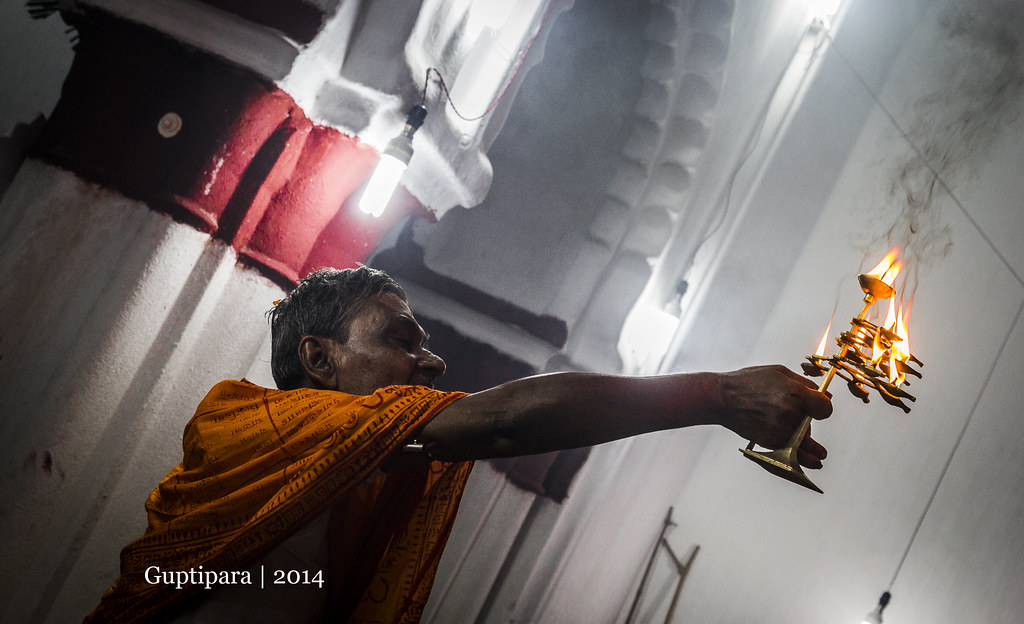 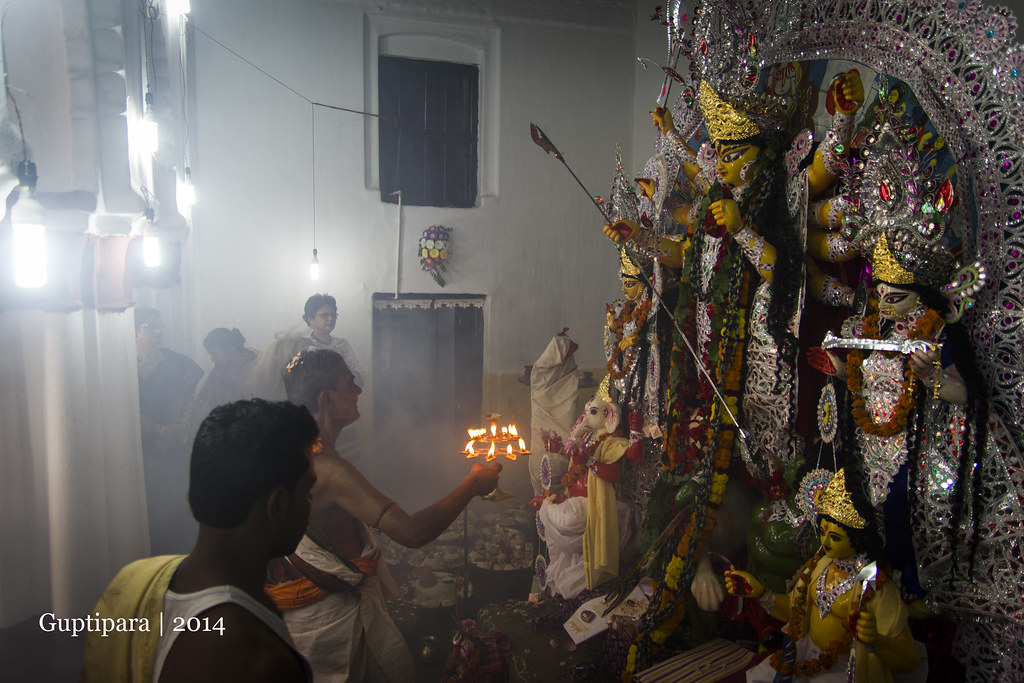 The ‘সন্ধিপূজা’* (Sondhi Puja) about to begin. Members of the family come forward and light the 108 lamps or ‘প্রদিপ’ (pradip). 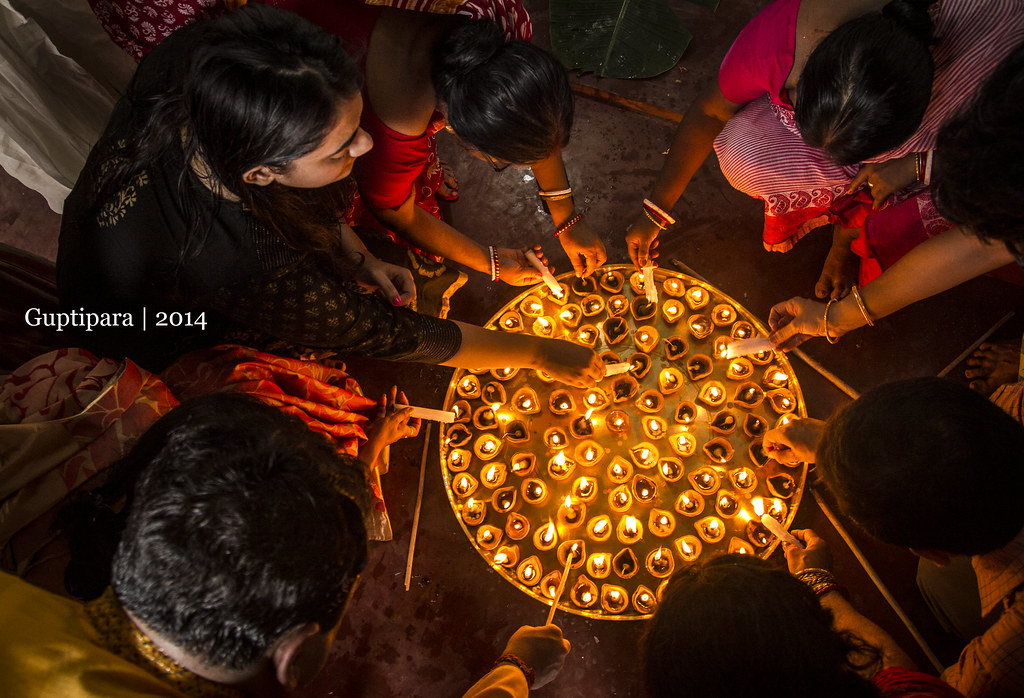 The Holy Sacrifice.
Ages back, the custom was to bring a goat, even a buffalo under the sacrificial machete.
Now with more awareness, it’s only Ash Gourd which is given a symbolic sacrifice.
The machete, though, shines with its original glory even after so many years. 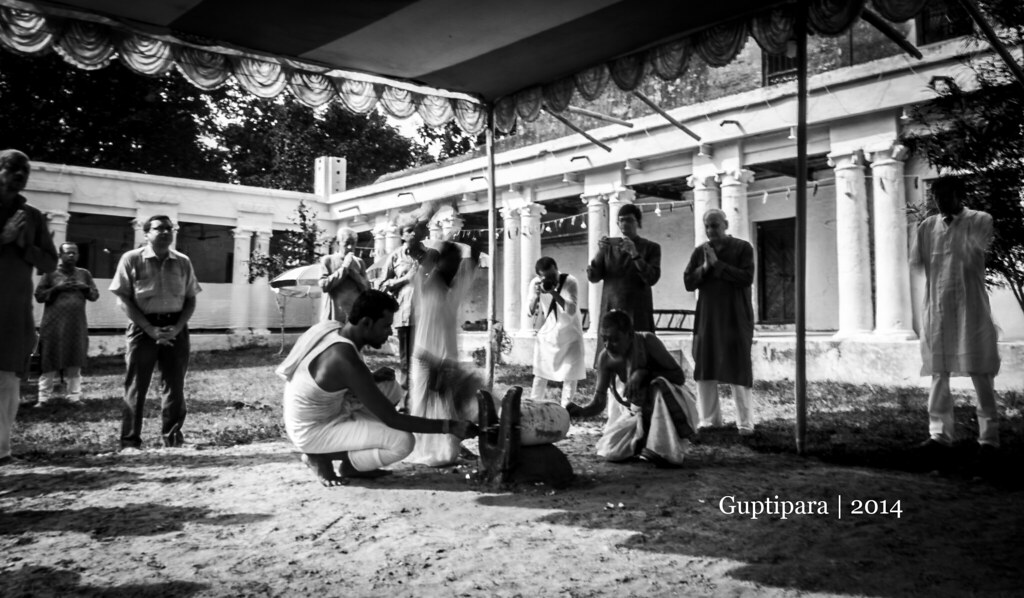 ‘Shyamal’da – the priest is making a point out here. 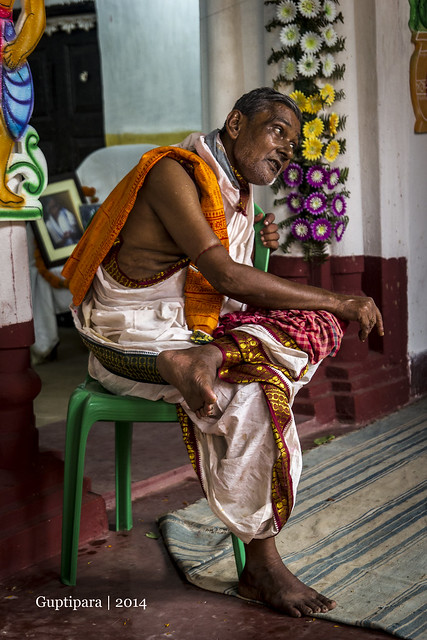 The myriad reflections of the Puja that just went by. 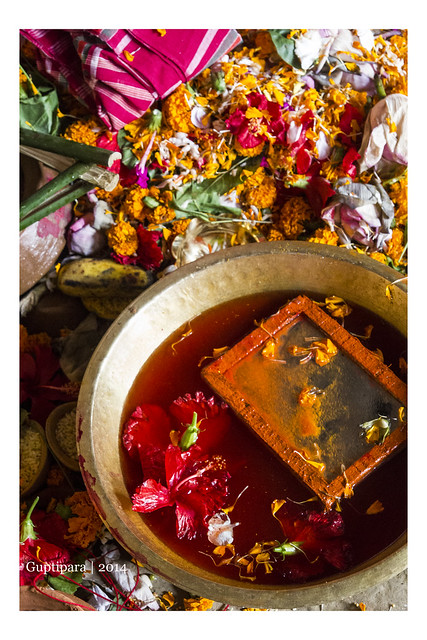 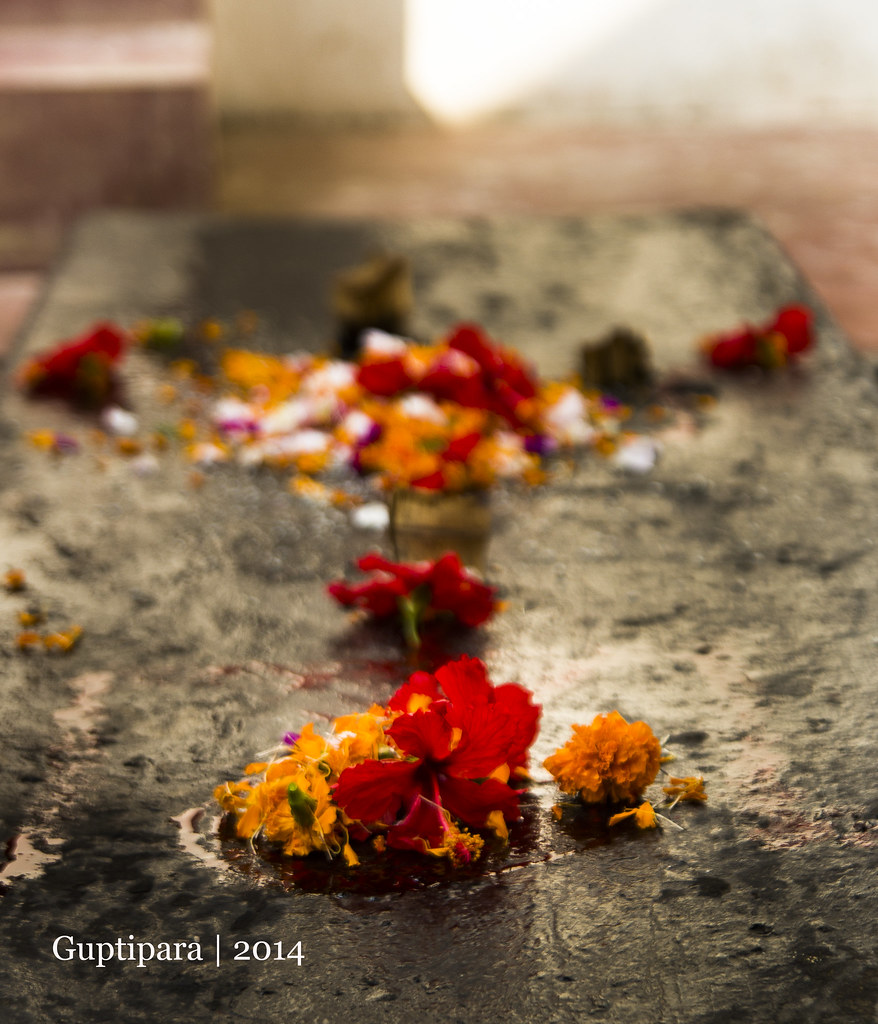 After the ‘দশমী পূজা’ (Dashami Puja), it’s time for the ladies of the family to perform ‘দেবী বরণ’ (Debi Boron). Here female members of the family applies vermillion to Maa Durga and her children and prays that Maa returns next year to her ‘paternal’ home. 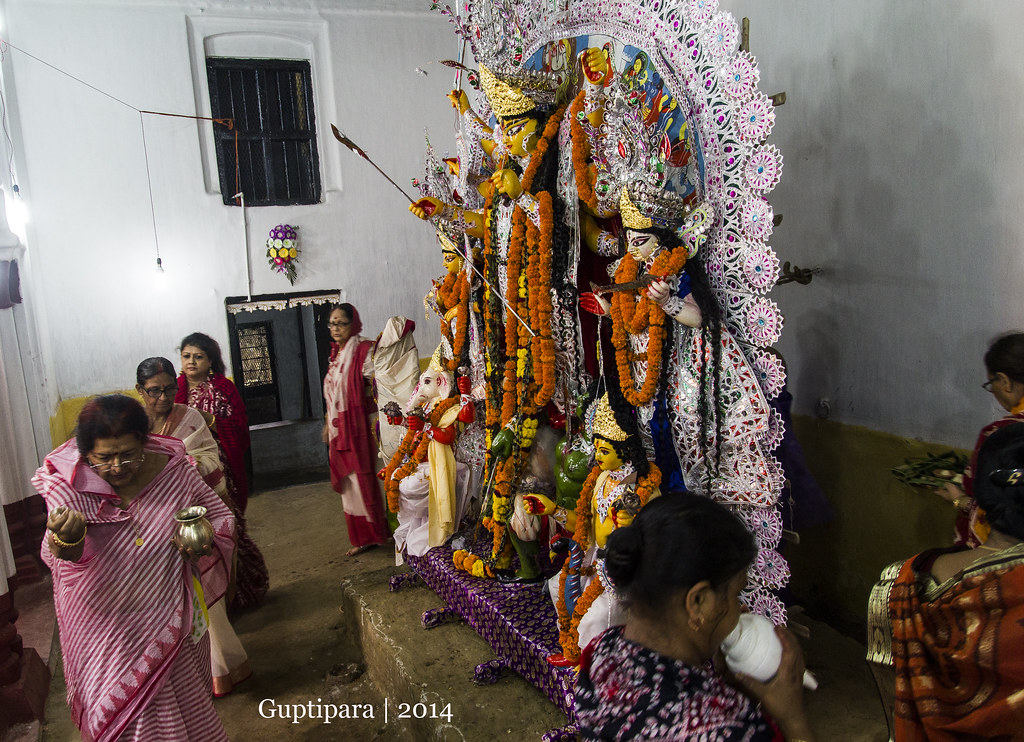 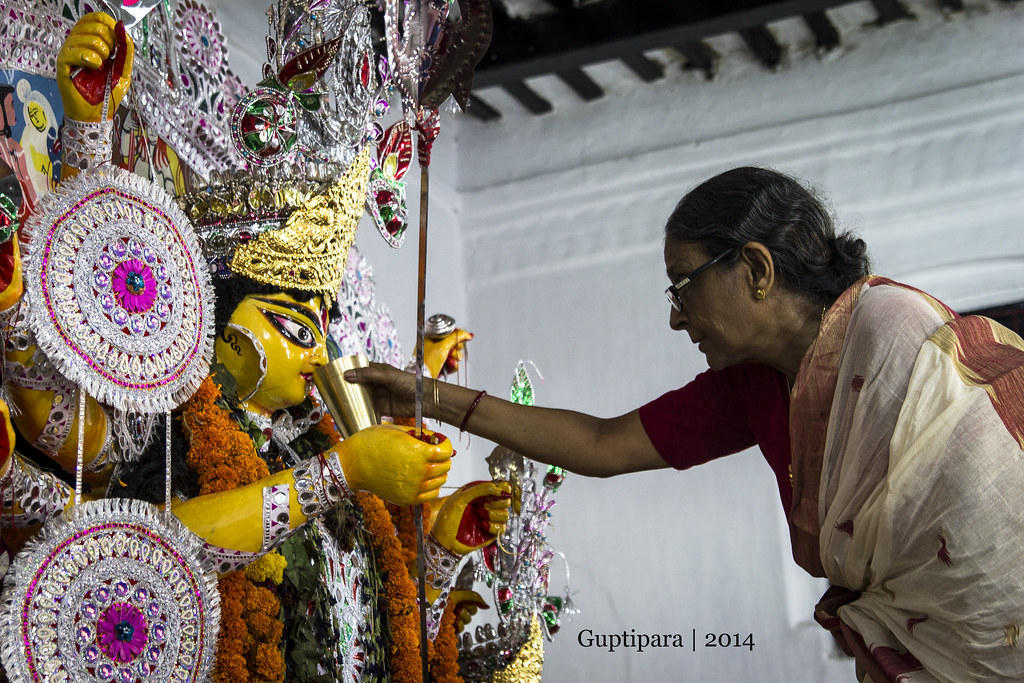 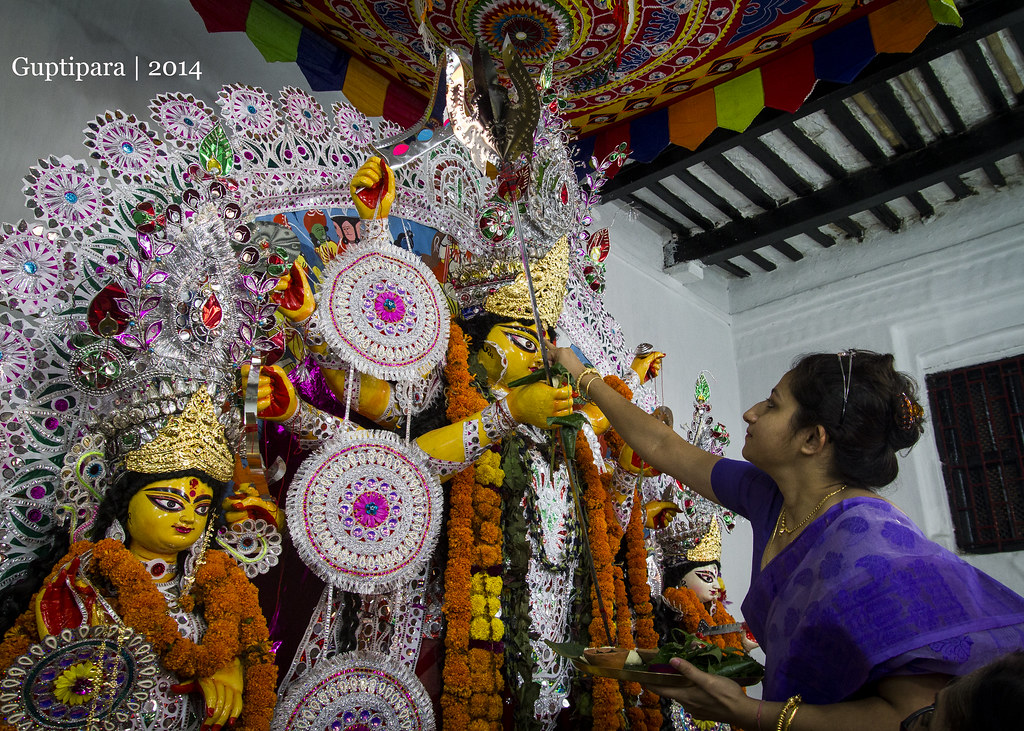 It’s time for all to see Maa Durga’s face through a mirror.
The mirror image that one will carry till Maa is back next year. 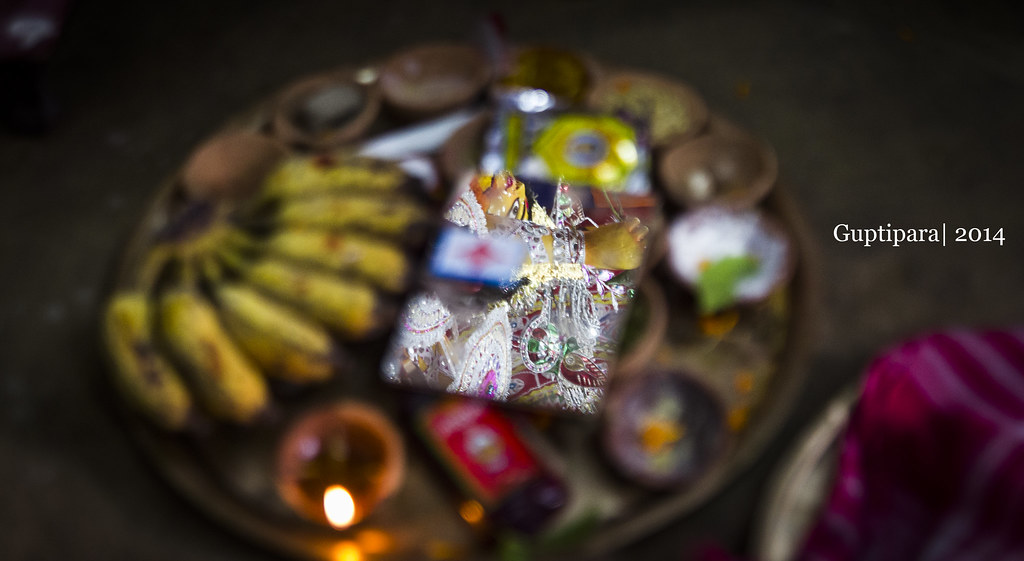 Bring out the camera! 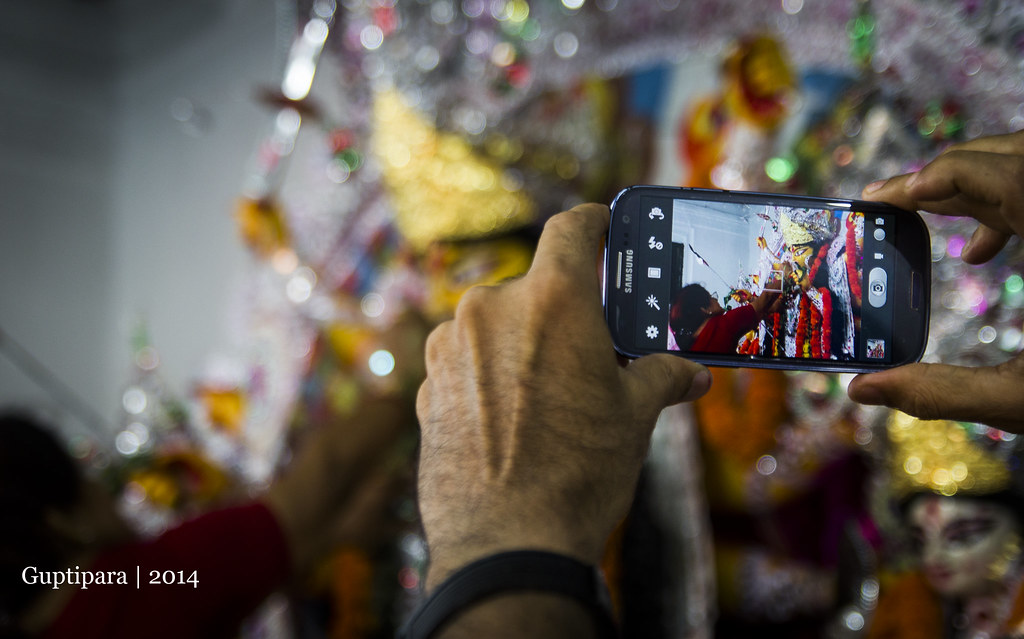 It’s time for ‘সিঁদুর খেলা’ (Sindur Khela). Ladies, across generations, come together and apply vermillion on each other.
Less an age-old custom, this has become a rage across all people! 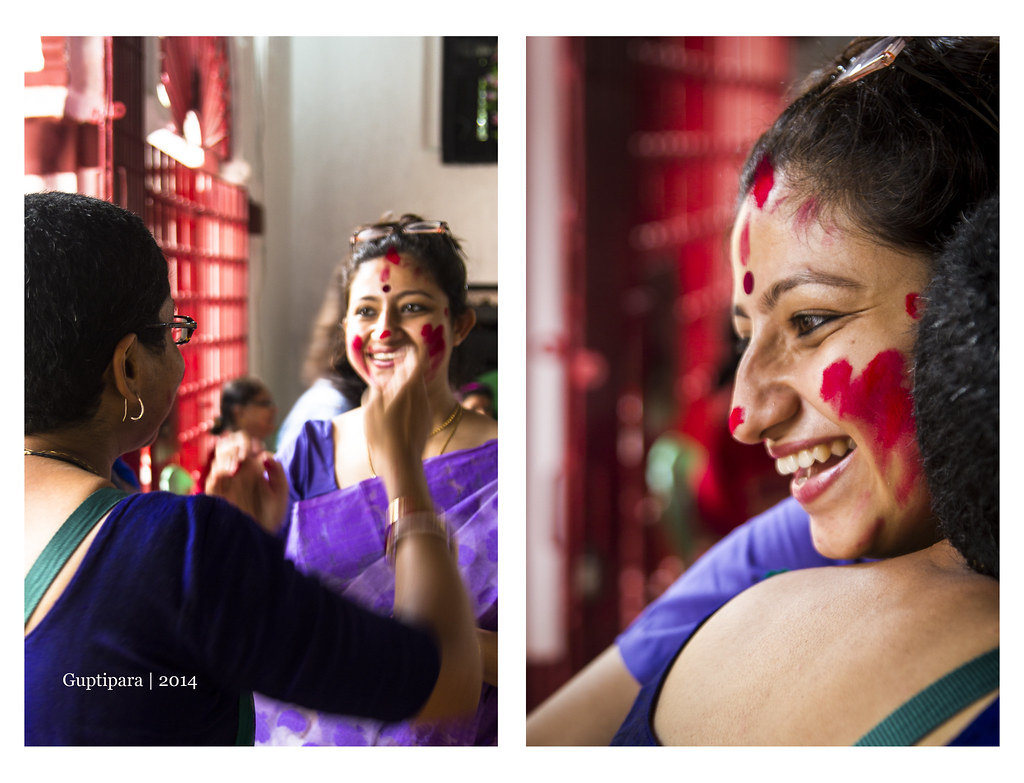 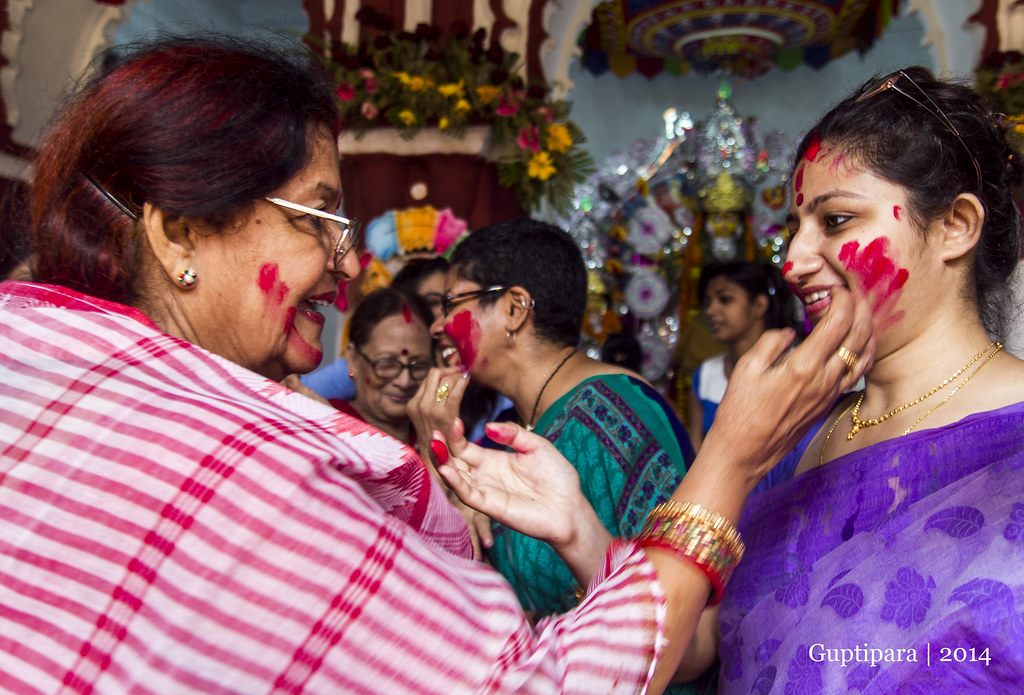 Every ritual is completed. Every prayer has been said.
Now arrives 12 carriers or ‘বেয়ারা’* (Beyara). New cloth is handed over to them by the young ones of the family.
The custom says that each of the 12 ‘বেয়ারা’ will have to wear this new cloth and then carry Maa Durga on their shoulders (tied to couple of bamboo poles) in her immersion journey.
The speed, vigor and the immense strength that the ‘বেয়ারা’ shows, is astonishing to say the least. 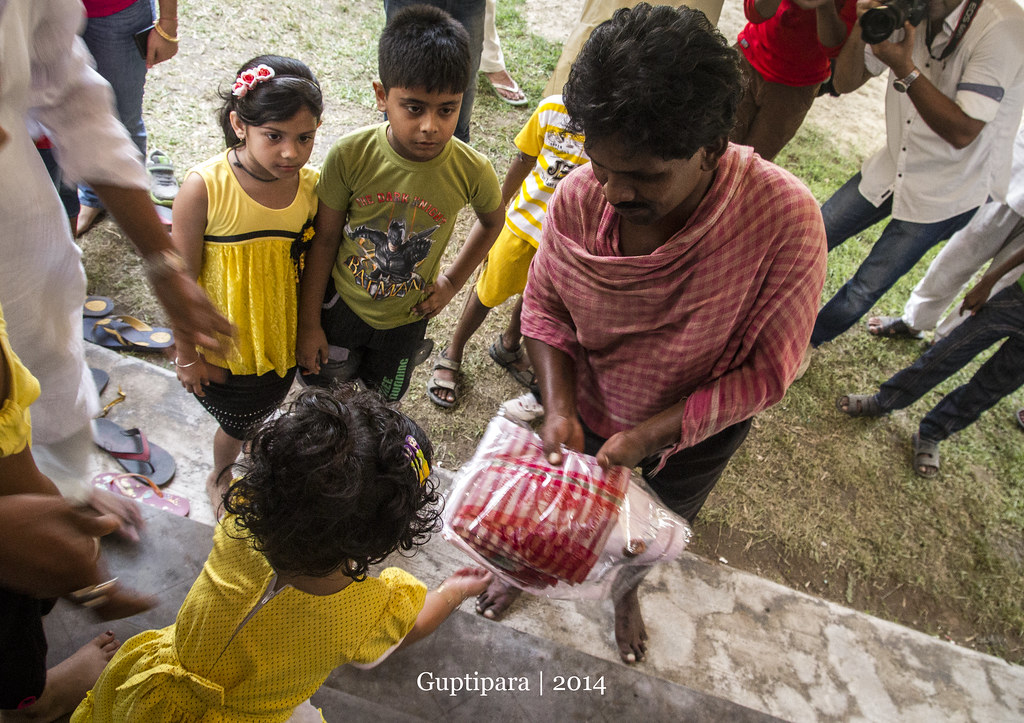 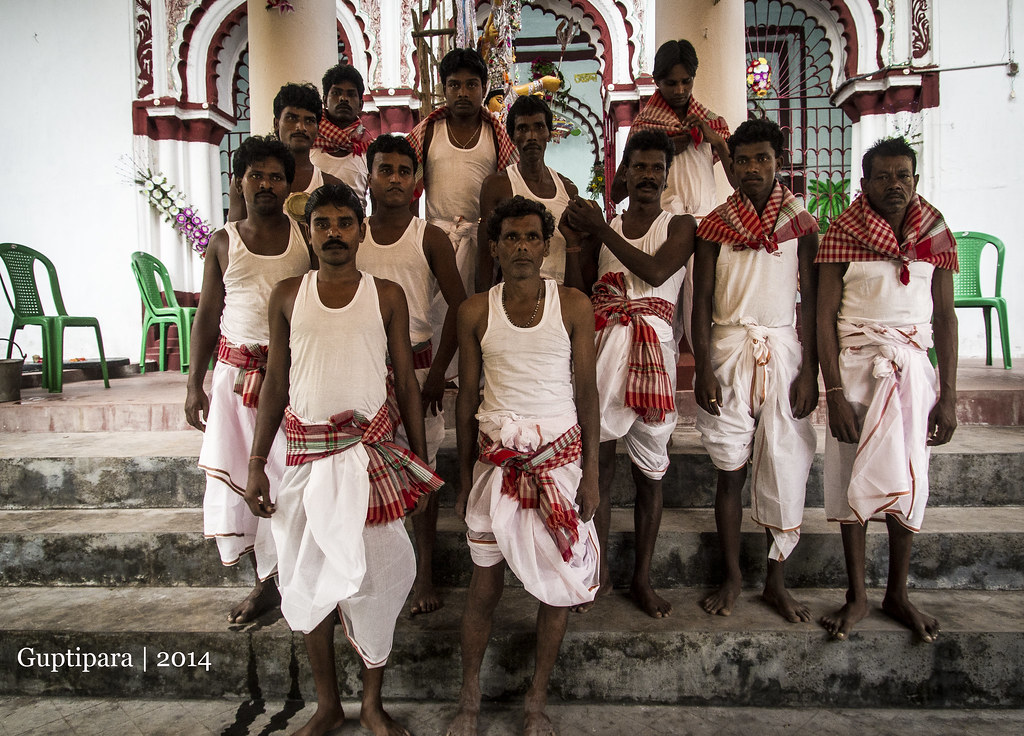 Its time to leave her ‘parental’ home and leave for her husband’s place. 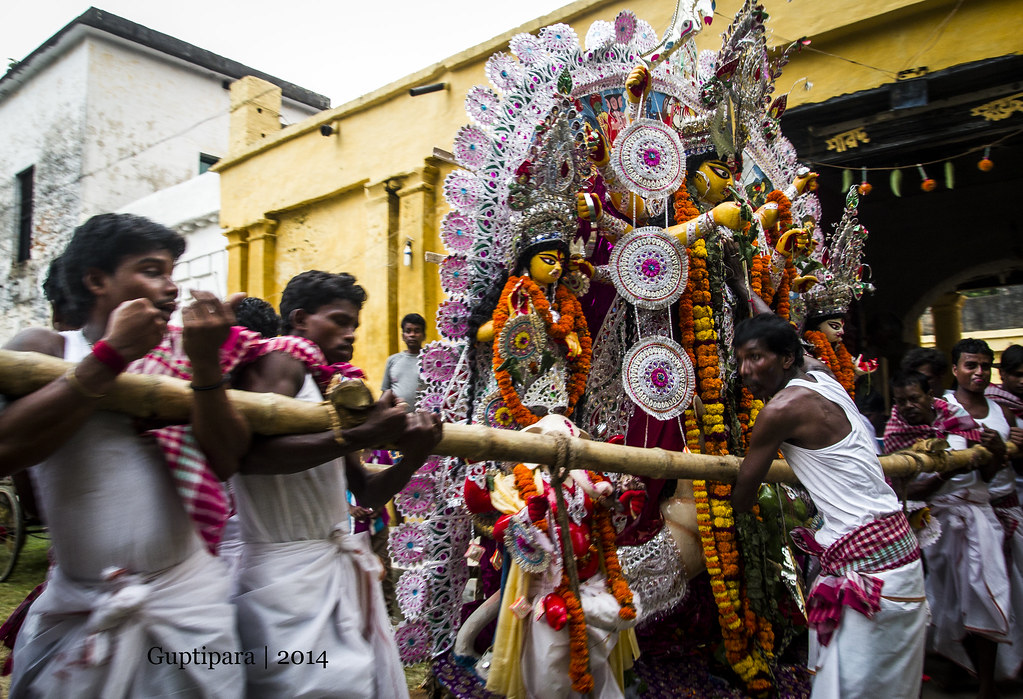 The prayers, one last time. 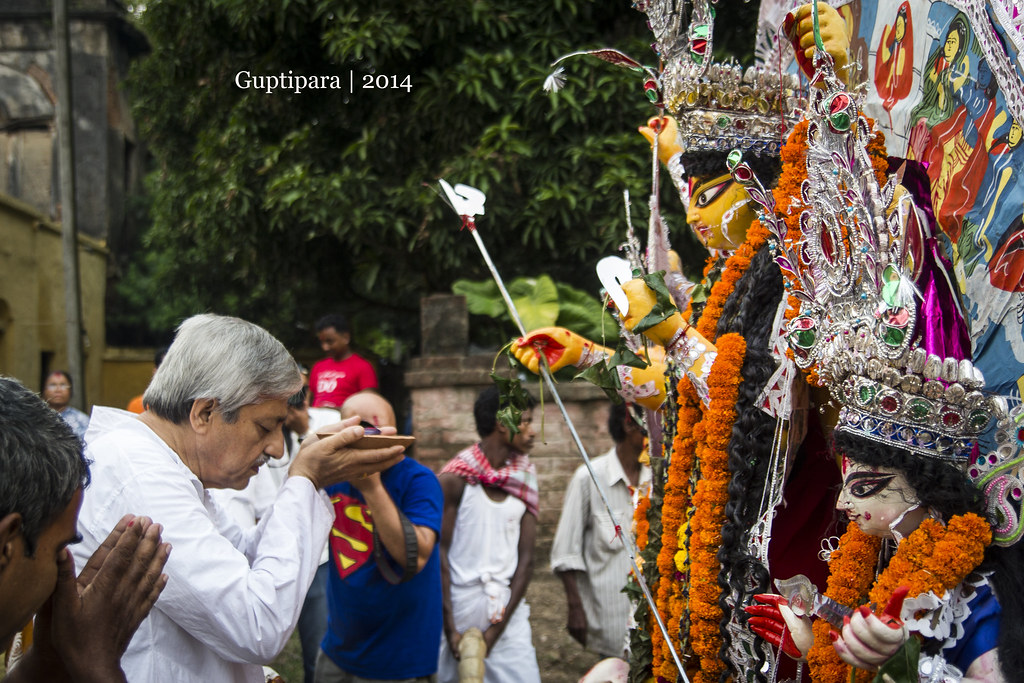 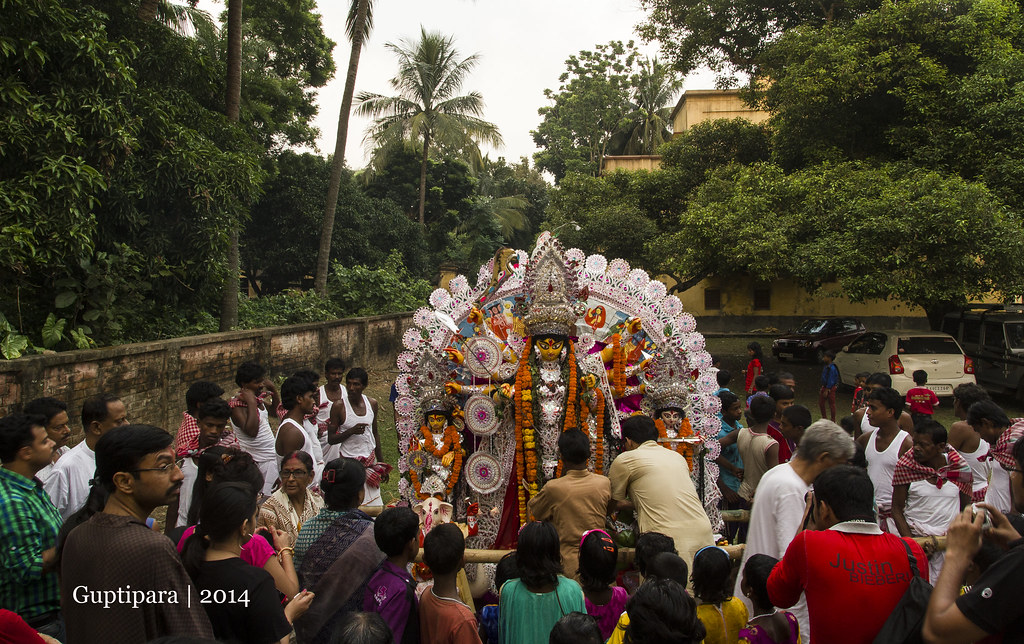 And the final journey begins – on the earthen roads, through the jungles, through paddy fields till the final mile. 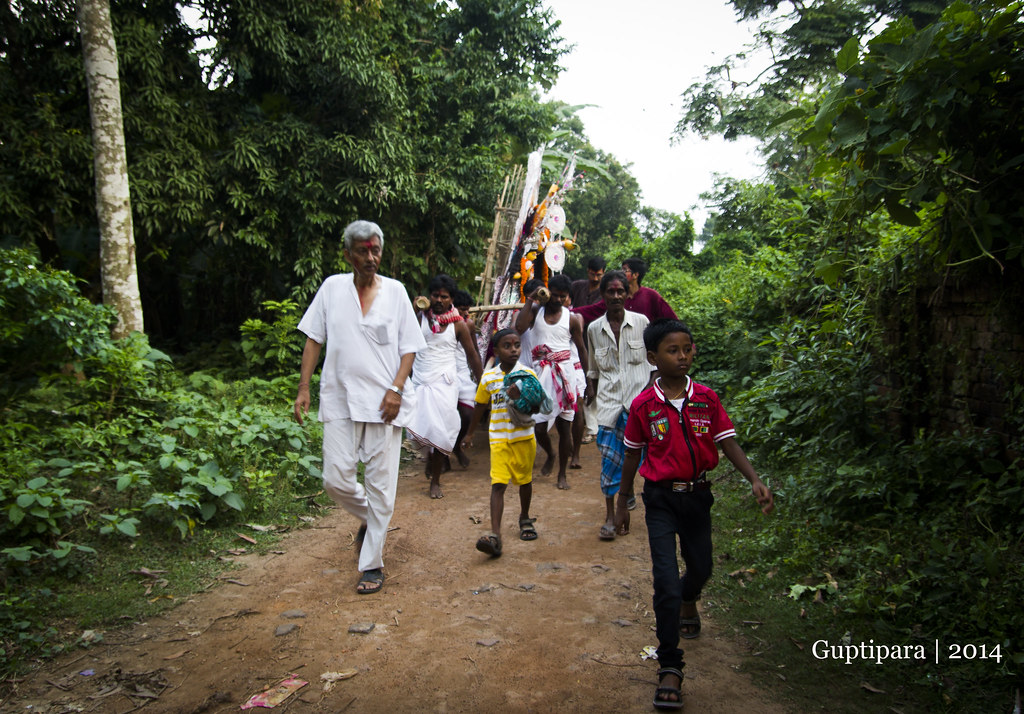 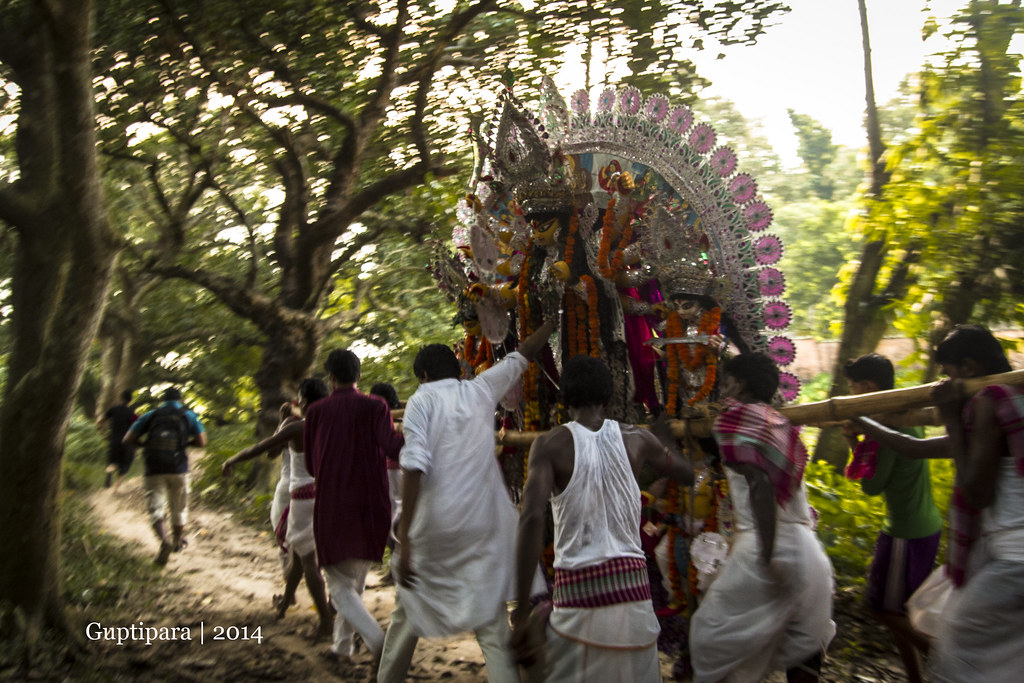 The day is ending… 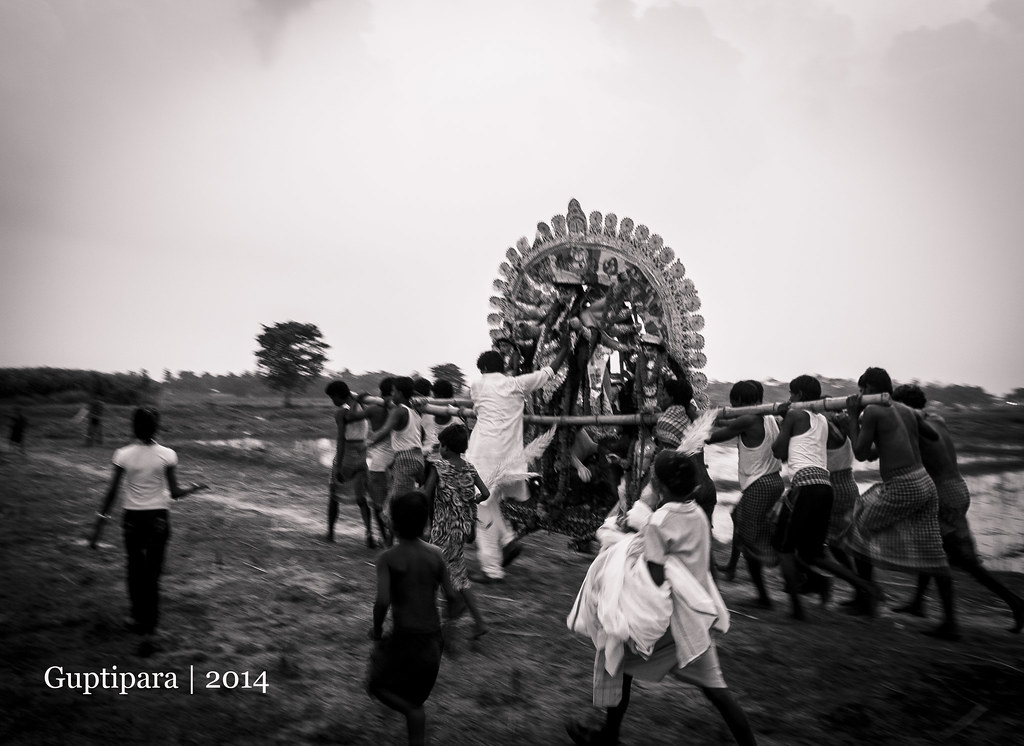 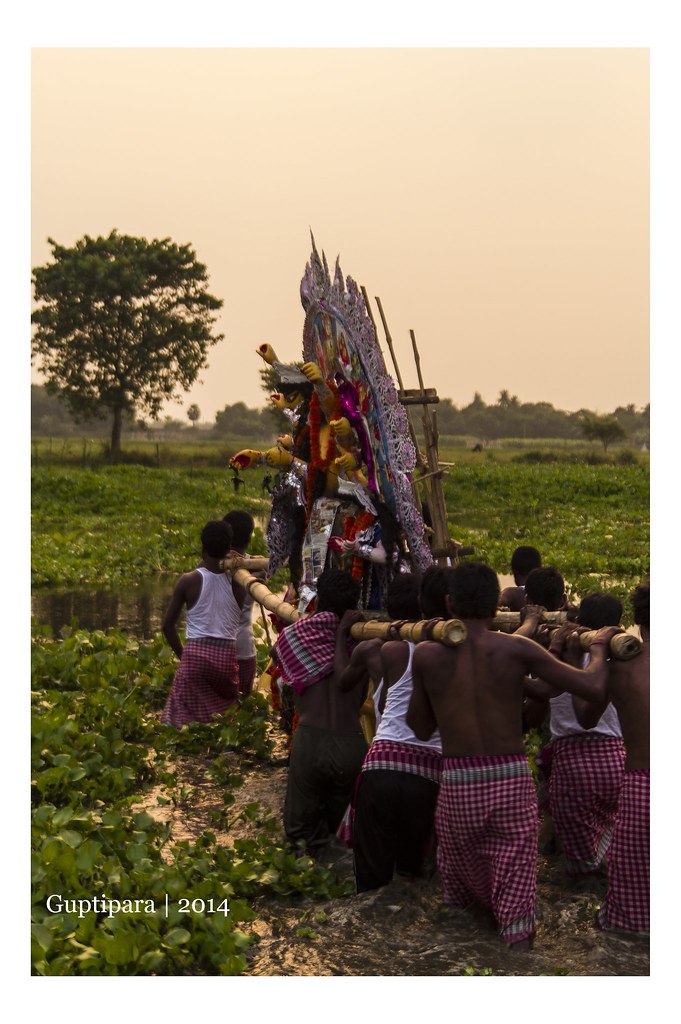 The Immersion.
Historically, the immersion used to happen in the Ganga.
Ages back, Ganga used to flow through this area shown below but slowly the Ganga river path moved away and as it is now today, a stagnant waterbody is all that remains.
The 12 ‘বেয়ারা’ carrying the idol, runs, performs the customary seven rotations of the idol and then pushes the idol deep into the water.

All that remains now… is the parting shot. 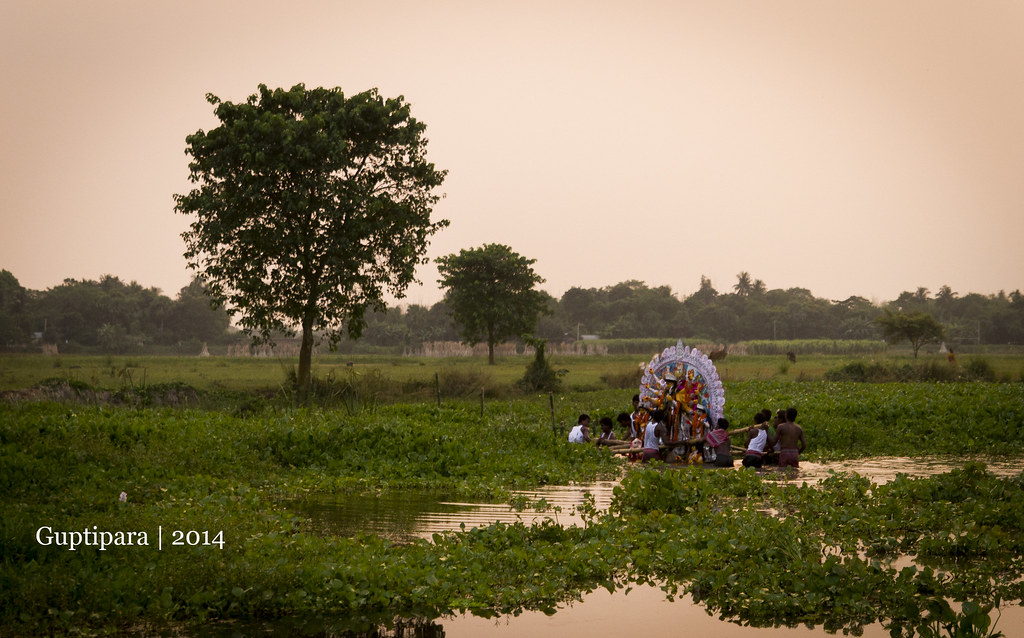 *বনেদী – of high lineage, distinguished
*ঠাকুরদালান – big hall where the idol is placed and puja is performed
*কড়িকাঠ – wooden beam of joist
*দশমী পূজা – the last prayers offered on the final day of the festival
*কাঠামো পূজা – worship and offering prayers to the wooden base on top of which clay idol is built
*বেয়ারা – people who carry the idol on their shoulders

NOTE: All images used in this blog are the sole property of the owner Rahul Roy (https://www.flickr.com/people/royzlife/). Copying,reproducing, altering, modifying these images for personal or commercial or any other use without prior consent of the owner is strictly prohibited.